The President signed an anti-oligarchic law how will this affect business and Ukraine?

Immigration-come-Ukraine Posted on November 13, 2021 Posted in About Ukraine, lawyer Ukraine 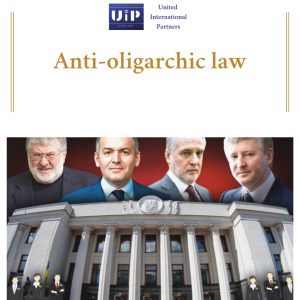 Ukrainian President Volodymyr Zelenskyy signed an anti-oligarchic law. We are talking about the Law of Ukraine “On the prevention of threats to national security associated with the excessive influence of persons with significant economic and political weight in public life (oligarchs).”

What is this Law for?

The so-called anti-oligarchic law provides the legal framework for separating big business from political struggles. In addition, the normative act was adopted to ensure the limitation of the destructive influence of privileged (oligarchic) ​​interests on the economic life of Ukraine.

Who are the oligarchs according to the Law?

According to the Law, a person having significant economic and political weight in public life (oligarch) will be considered an individual who simultaneously meets at least three of the following criteria:

– has a significant impact on the media;

– is the ultimate beneficial owner of the enterprise, who, after the start of this law, is a subject of natural monopolies or holds a monopoly (dominant) position in the market in accordance with the Law of Ukraine “On the Protection of Economic Competition” and maintains or strengthens such a position within one year;

– the confirmed value of the assets of the person and business entities, the beneficiary of which he is, exceeds 1 million living wages established for able-bodied persons on January 1 of the corresponding year.

What does the Law provide?

The obligation to submit a declaration of contacts with oligarchs or their representatives will apply to all officials, on whose decisions the fate of society or government decisions depends.

How will this law affect business?

For small and medium business owners, the Law can help empower and grow their business. Also, this innovation will have a positive effect on the country’s economy and soon we can expect an inflow of investments to Ukraine to create jobs.

As we can see, Ukraine has long embarked on the path of fighting the oligarchs and their influence on the country’s economy, and is moving along this path. We cannot make any hasty actions about the work of this Law, but movement is always good for the country’s economy. The more effort is made, the better results we will achieve.