Immigration-come-Ukraine Posted on March 2, 2022 Posted in About Ukraine 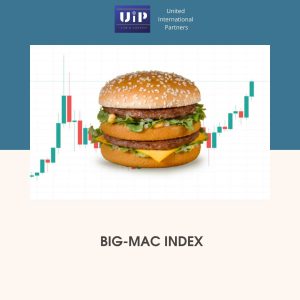 Big Mac Index – an unofficial way to determine the purchasing power, according to which the exchange rate should equalize the cost of a basket of goods in different countries (that is, the ratio of exchange rates), but instead of a basket, one standard burger is taken, produced by McDonald’s everywhere.

According to the Big Mac index, which is published annually by the British economic magazine The Economist, he called the hryvnia one of the most undervalued currencies. This is evidenced by the rating data for January 2022.

The publication compiles the “Big Mac Index”, without claiming to be economic truthfulness, but only comparing currencies by the cost of products included in the classic burger from the McDonald’s fast food chain.

Thus, The Economist points out that a “Big Mac” in Ukraine costs 69 hryvnias, while in the US it costs 5.81 dollars (at the exchange rate at the time of calculation, this is 164.8 hryvnias). That is, the exchange rate of the Ukrainian currency in accordance with the Big Mac index is undervalued by 58.1% when compared with the actual exchange rate.

It is noted that according to this calculation, the dollar exchange rate against the hryvnia in terms of purchasing power should be at the level of UAH 11.88 / dollar.

The most undervalued world currencies in January 2022 were also named the currencies of Russia, Turkey and Indonesia. The overvalued currencies are the Swiss franc and the Norwegian krone. In Switzerland, a Big Mac costs 22.2% more than in the US, and 10% more in Norway.

The Big Mac rating began in 1986 and was based on the price of an ordinary sandwich. The financiers explained their choice by the fact that the Big Mac hamburger is a kind of analogue of a grocery basket, since it contains bread, meat, and vegetables.