30th anniversary of independence and a little history about Ukraine

Immigration-come-Ukraine Posted on August 24, 2021 Posted in About Ukraine 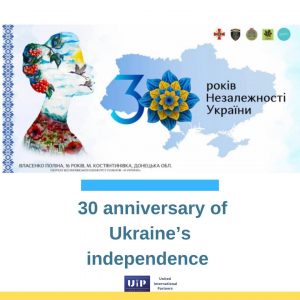 Today, August 24, 2021, Ukraine celebrates its 30th anniversary of independence. In connection with this holiday, parades, celebrations and other events are held throughout Ukraine in honor of a significant date for Ukraine and Ukrainians.

Today we, United International Partners, want to tell the story of the path from the subordination of the Union of Soviet Socialist Republics to the establishment of Independence and the building of a strong, beautiful and successful state.

Ukraine’s Independence Day is the history of the holiday

Through out the history of our country, from the formation of the Ukrainian nation to the present day, Ukrainians have repeatedly tried to become independent. Initially, Ukrainians were independent and lived in Kievan Rus, but over time Kievan Rus declined, and Ukrainians lived in the Muscovy and became part of it. Also, our lands and nation were part of the Principality of Lithuania, the Commonwealth. The struggle for the formation of a new nation and an independent Ukraine was started by B. Khmelnytsky in the 17th century, but unfortunately we did not gain independence then.

The next revolution took place in the twentieth century, when the Ukrainian People’s Republic was formed, which lasted from 1917 to 1921, led by Mykhailo Hrushevsky and Volodymyr Vynnychenko and Simon Petliura. And other groups that later fell into disrepair or went underground.

Ukraine’s Independence Day was first celebrated on July 16, 1991, the anniversary of the adoption of the Declaration of State Sovereignty of Ukraine by the Verkhovna Rada of the Ukrainian SSR. The resolution On the Day of Proclamation of Independence of Ukraine read as follows:

“In view of the will of the Ukrainian people and their eternal desire for independence, reaffirming the historical importance of the adoption of the Declaration of State Sovereignty of Ukraine on July 16, 1990, the Verkhovna Rada of the Ukrainian Soviet Socialist Republic decides: holiday of Ukraine “.

However, this date was later postponed to August 24. It was on August 24, 1991 that the Verkhovna Rada of the Ukrainian SSR adopted the Act of Independence of Ukraine. Ukraine’s Independence Day was finally confirmed in an all-Ukrainian referendum on December 1, 1991. From that day on, the history of Ukraine has changed forever.

Independence Day has been considered an official national holiday since 1992. Today Ukraine is 30 years old.

We sincerely want to congratulate all Ukrainians on this holiday, and invite foreigners to Ukraine to visit Kyiv – the city of chestnuts, visit the seaside boulevard in Odessa, walk through the ancient streets of Lviv, and visit the castles that are located throughout Ukraine.